“Go abroad, if you don’t find a job here”

an of the bazaar”. Who doesn’t know, in Prilep, that in the centre of the city you can eat sandwiches and fried potatoes at the Pink Panter fast food?
Maybe what is not known is that Zlatko Momiroski, 41 years old, went to Italy to work when he was really young. He spent there several summers, and he can speak a good Italian.
He talks about his experience for my column “People of Prilep” of Myg, the Magazine for Youth Generation (read the third, the second and the first issues of the magazine and the interviews to Mrs. Stevanoska and Mr.Bidjoski).

Zlatko, when did you go to Italy?
In 1993, I was 21 years old. I had a friend there who already worked, and I joined him.
Where did you live, and what did you do?
I was in Caorle, in the North of Venice. We were pedlars, with a regular permission. We had a stand in the centre of the city and we sold small paintings, made by gypsum, plastic and moulds. We made also bracelets and necklaces.

How much time did you spend in Italy?
I worked there from 1993 to 1995. Well, I worked from May to September, when there were tourists in Caorle.
How is the city?
Oh, Caorle is very nice. It’s an old town on the seaside, traditionally there are many fishers and during summers there are really a lot of tourists.
Did you already know Italian when you went in Caorle?
No, I didn’t. The first fifteen days were quite difficult. But I had many Italian friends, and spending time with them I learnt Italian in t

wo months.
Have you ever had problems in Italy for being a foreigner?
Absolutely no, I can say that Italian people are all good, or at least I was lucky because I’ve never met someone impolite with me. I think that there aren’t differences between Macedonian and Italian people, we are the same. I still keep in touch by Facebook with Eleonora, Claudia, Ivan, Francesca, Paolo…for me Italy is a second home.
What did you do in your free time in Italy?
I had a lot of fun! We worked from 8 to 1 am and from 6 to 12 pm. And then we went to restaurants, bars, discotheques…
Can you tell a particular episode about your life in Italy?
Once I had a little problem with the Italian police at the border with Slovenia. I gave my passport to the policeman and after a while he said: “This is false, I don’t see your name on the register”. So I gave him my stay permission which demonstrated I was a regular worker, and he apologized a lot of times for the mistake.
And when you came back in Prilep, what did you do in the rest of the year?
In Caorle I had a good salary, also because I was young and without a family and I didn’t need a lot of money, but when I came back here I worked in the kitchen of a fast food. This has been always my job.
When did you start to work?
I was 17 years old, I hadn’t finished the school yet. I made pizza in “Leone” restaurant for three years, and then I went to Italy.
About your life here, do you like Prilep? 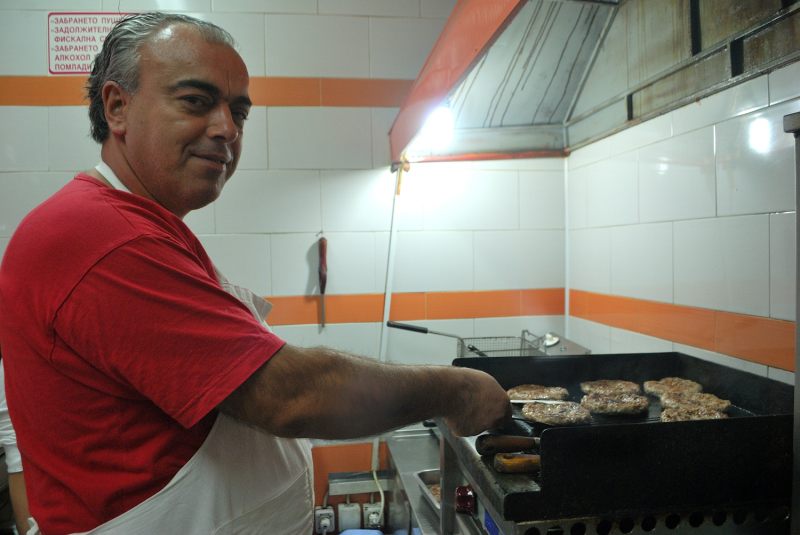 Of course, everything is nice here. I would never change this city with another one, it has been improved a lot in the last 15 years. We have a big problem with the young unemployment, but this is a problem of all Macedonia.
Do you regret something of your life?
Yes. I don’t even know why I came back from Italy. Prilep is nice, but here you haven’t possibilities to have a better life after you have reached a certain level. There’s no social mobility. And I made a mistake to not have opened earlier this fast food, that I own since 2000. Anyway I cannot complain, I have a family, a job and I feel happy and lucky.
What has been the best thing of your life?
The birth of my children. Every father knows it.
Do you have some advices for the young people?
They have not to drink and to use drugs. They have to think with their head. And they have to work, I see so many young people doing nothing here. I understand that it’s difficult to find a job, but I think that most of the people don’t want to work because of the low salaries. Ok, it’s not right, but I can’t understand how it is possible to stay here doing nothing. Rather, if you don’t want to work here for 150 euro per month, it’s better to go abroad.