Barilla, when pasta is not for gay people

“For us, the concept of sacred family rema

ins one of the
fundamental values of the company. We will not do commercials with homosexuals, because for us the family is the traditional one. If gays like our pasta and our communication, they will eat our pasta. If not, they can avoid it and eat another brand. It’s not always possible to please everyone”.

These words were said by Guido Barilla, the chairman of the famous Italian food company. Barilla was interviewed on 25th September by the radio programme “La Zanzara” (The Mosquito) and his answer to the question if the company would ever show a gay family in advertisement sparked a big debate in Italy. 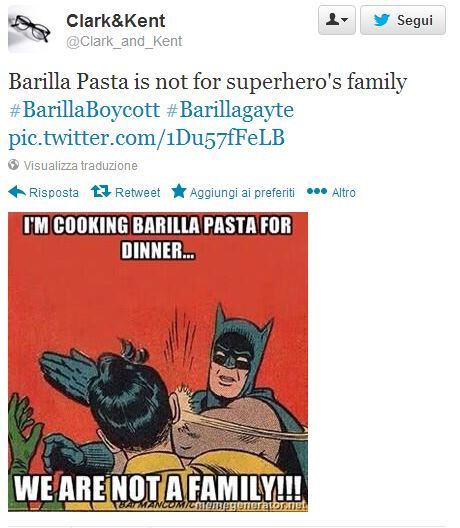 orks became the megaphone of the protests, and for the following two days articles and comments about the issue were everywhere. Aurelio Mancuso, president of the homosexual association Equality Italia, was the first to use on Twitter the hashtag #boicottabarilla (a call to boycott the food company).
This and similar hashtag (also #homophobia) were the most used on 25th September in Italy. Besides, a lot of photomontages appeared on the Web, mostly joking on the fact that the best known Barilla’s slogan is “where there’s a family, there’s a home”.

Even many women were offended by Guido Barilla, who also said that “the family to which we address our attention is the traditional family, in which the woman has a fundamental role, that of mother, wife, lover, grandmother, person who takes care of the house”.

atter what Barilla said about gay people, because he’s not a politician.
The gay rights watchdog Ilga-Europe writes in its latest research that Italy has a “relatively high level of homophobia and transphobia which exp  resses itself through violence”. It’s not rare that gay people are beaten on the streets.

So the real problem in Italy about homophobia is beyond the words.
But is not our society also built by words?